In the Kitchen with Sigona’s Featuring: Grapefruit

Grapefruit and Avocado Salad with a Meyer Lemon Vinaigrette

Simple, healthy and delicious! This is lovely as a side to white meats or as a brunch feature. A great way to start the New Year! You’ll likely have vinaigrette remaining, so save it to toss with a green salad topped with grilled chicken or steak, avocado and grapefruit. Inspired by Ina Garten. Serves 4 to 6. 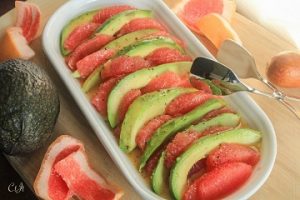 Directions: Begin by supreming* the grapefruits and collecting** the juice that drips out.

Place the mustard, grapefruit juice, salt and pepper in a small bowl. Slowly whisk in the olive oil until the vinaigrette is emulsified. Taste; add more salt if desired. Set aside.

Cut the avocados in half lengthwise, remove the seeds and use a large spoon to carefully scoop the flesh from the peel. Cut each half into 5 or 6 thick slices. Gently toss the avocado slices in the vinaigrette to prevent them from browning.

Arrange the avocado and grapefruit in a pattern on a circular plate or a long platter. Spoon about a third of the vinaigrette on top, sprinkle with a little more salt pepper, and enjoy. Serve remaining vinaigrette on the side.

*Supreming (or segmenting) citrus: Cut the top and bottom off of your grapefruit. Slice the peel from the fruit, top to bottom, getting as close to the flesh as possible. Once the peel is removed slice any remaining pieces of white pith from the fruit so no white remains. Catching the juice drips in a bowl, slice closely along the sides of each membrane to neatly remove the sections in between (these are the supremes). Set the supremes aside, discard the rest. Squeeze any remaining juice from the membranes and the sliced peels, if desired or needed.

Slicing grapefruit makes for a nice, simple breakfast, but add just about 15 more minutes to the process to introduce a few more flavors to give yourself a sweet treat. Baking grapefruit caramelizes the natural sugars in the citrus, which are enhanced by the maple and brown sugar. Serves 2. 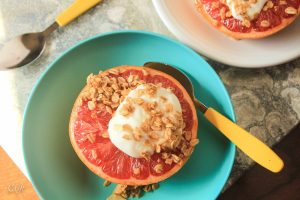 Place the grapefruit halves cut-side-up in an 8×8 or 9×9 baking dish. Spread 1 teaspoon of syrup over each half of the grapefruit, followed by one teaspoon brown sugar.

Bake the grapefruit for 15 minutes. Remove from oven and allow to cool about 5 minutes.

Place each half in an individual serving dish; top each with 2 tablespoons yogurt and sprinkle with granola. Serve. 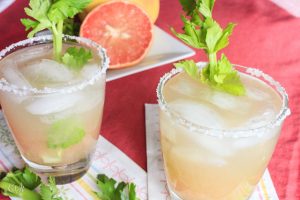 Directions: Thinly slice one stalk of celery into half moons, setting the remaining two stalks aside — preferably the two with more attractive tops — to be used as garnish.

Meanwhile, wet the rim of two short cocktail glasses by either dipping them in the grapefruit juice or rubbing the edge with a segment of grapefruit. Sprinkle some kosher salt on a plate then evenly dip the rim in the salt to coat.