The Amazing Nutritional and Health Benefits of Wild Mushrooms

When I was younger, my images of mushrooms were the simple white button mushrooms found at every supermarket. I have to confess that I didn’t particularly care for them. But as I have expanded my palate, I have found that the varied choices of wild mushrooms enhance the flavors of many dishes. While there are 38,000 varieties worldwide and 3000 in North America, a few dozen are cultivated commercially and are the subject of this article. Some of the more common wild mushrooms include chanterelles, morels, shiitakes, oysters and porcinis.

Mushrooms are not part of the vegetable family but rather belong to the fungus class. Fungi have some characteristics similar to plants and some to animals. Fungi and plants both have cell walls. However, fungi lack chloroplasts (which give plants their green color and enable them to convert sunlight into energy), but instead require organic material for their energy similar to animals. Mushrooms grow best in damp, moist conditions. As many of us have observed, mushrooms seem to sprout after the rains fall. Autumn and winter, here in California, are particularly good times for mushrooms to grow. Mushrooms play a critical role in the decomposition of organic material. They absorb important nutrients that are different from those present in most vegetables and fruits.

So what are the nutritional and health benefits of wild mushrooms? First, mushrooms are extremely low in calories. A ½ cup contains only about 10 calories. The low calories are a result of the high water content of mushrooms—about 90% water! Mushrooms also have little fat so they are heart healthy. They are a great source of non-animal protein. A ½ cup of oyster mushrooms, for example, is about 31% protein. Consuming mushrooms is a great way to add extra protein to your diet for both vegetarian and non-vegetarian alike. Mushrooms also contain all the essential amino acids your body requires for optimal wellness. These important amino acids are broken down and then used to form new cells, hormones, enzymes, etc. For further info on the benefits of protein, click on the link http://www.bettereatingcoach.com/72412-benefits-of-breakfast.html. Mushrooms are rich in some of the B vitamins needed for energy production and in selenium, an important antioxidant. They also contain moderate levels of magnesium, calcium, zinc and potassium. Each wild mushroom will have a different vitamin and mineral composition depending on its growth environment.

Let’s focus on Chanterelles. The Latin name for Chanterelle means cup or drinking vessel due to its shape. Chanterelles are distinguished by having ridges on the underside instead of the gills that most other mushrooms possess. Chanterelles have a golden color indicating the presence of the antioxidant, beta-carotene. For more about beta-carotenes, see my article http://www.bettereatingcoach.com/7912-a-peach-a-day.html. Found growing under trees, Chanterelles have a meaty texture and a nutty and fruity flavor reminding one of apricots or peaches. Due to their nutritional composition, they are supportive of the eyes, the immune system and the lungs. Chanterelles are 37% protein. They are high in vitamin D, B2, B3 and B5 as well as the minerals iron, potassium, copper, manganese and selenium. They, like other mushrooms, contain all the essential amino acids. Chanterelles are very delicate so don’t overcook them as they can become mushy. 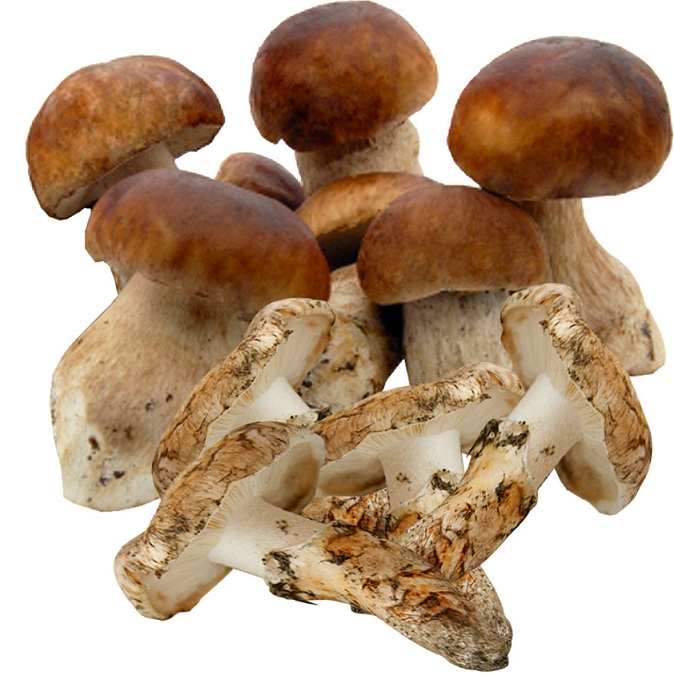 All mushrooms are also high in fiber. Fiber is important in allowing our digestive tracts to process and eliminate waste as well as helping to lower cholesterol levels. In addition, fiber helps prevent constipation. A ½ cup of mushrooms provides about 3 grams of dietary fiber. Research at University of Illinois at Urbana-Champaign has shown that cooked mushrooms have enhanced fiber content over raw mushrooms. The cooking process allows the hard cell walls to be broken down allowing the fiber to be released and to perform its health benefits.

Glutamic acid, one of the amino acids in mushrooms, is one of the most abundant neurotransmitters in the body. Neurotransmitters are signaling compounds that have many functions throughout the body but especially in the brain. Glutamic acid is essential for normal cognition. It’s needed for learning, memory and problem solving. Research is being conducted to see whether glutamic acid may help in the treatment of Parkinson’s, schizophrenia and muscular dystrophy. Glutamic acid also helps with energy production in the brain, turning sugars and fat into glucose, which is the body’s main fuel source. Athletes also may benefit from glutamic acid because it assists in the regeneration of damaged muscle cells after hard workouts.

Medicinal mushrooms are very popular in Chinese medicine. Now scientists are looking at the compounds in these mushrooms for their anticancer and immune supporting properties. These compounds may help the immune system protect from and inhibit tumor growth and enhance white blood cell formation. One particular compound being studied is called beta-D-glucan. Beta-D-glucans may also enhance the effectiveness of chemotherapy in cancer treatments.

One health warning if you have gout: Avoid or limit eating mushrooms, as they are high in purines that break down into uric acid that can exacerbate gout.

Everything I have written is about commercially cultivated wild mushrooms. Be aware that many wild mushroom varieties in the forest are toxic. Toxic varieties can be difficult to distinguish from safe varieties. Consuming toxic mushrooms can lead to organ failure and death.

For further information about any aspect of nutrition, please contact me at http://www.bettereatingcoach.com.