Cauliflower – The Tree of Life

How often have you walked right by those white cousins of broccoli not knowing what to do with them? Cauliflower may seem like the ugly stepsister of the cruciferous family, but in fact, it is a powerhouse of important nutrients for us to incorporate into our diets. Given the nutrients and potential health benefits, eating a serving of some type of cruciferous vegetable every day seems like an easy way to boost our health!

The cruciferous family includes broccoli, Brussels sprouts, cabbage and kale as well as cauliflower. Cauliflower originated in Asia Minor from wild cabbage, eventually reappearing in the Mediterranean region around 600 BC in its present form. Cauliflower typically has a curd, a tightly formed head of undeveloped flower buds attached to a central stalk. Green leaves protect the flowers from sunlight preventing chlorophyll formation. Chlorophyll is the pigment responsible for the green color of vegetables. Cauliflower is at its peak from December through March. The curd should be firm with a little give. Usually you’ll find white cauliflower, but it may also be green, orange or purple. The colored cauliflowers will possess more antioxidants than white ones. You’ll find that cauliflower has a slight smell of sulfur (more on that in a bit).

Cauliflower is very low in calories; one cup has only 26 calories! It is also low in fat and has no cholesterol. Important vitamins found in cauliflower include vitamin C with a daily value (DV) of 86%, vitamin K with a DV of 21%, folate with a DV of 15% and vitamin B6 with a DV of 10%. It also is a very good source of potassium, manganese and other B vitamins. In addition, one cup possesses about 5% of the RDA of dietary fiber. 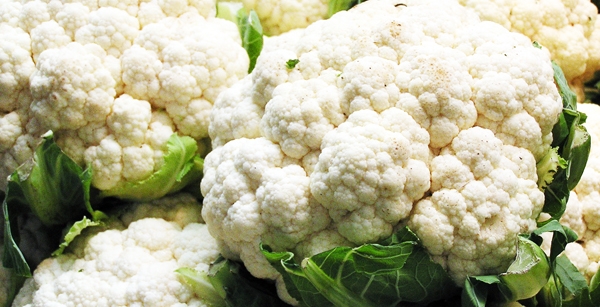 There are four main body systems that the nutrients in cauliflower support.

When purchasing cauliflower, look for heads that are free from blemishes. Cauliflower can be stored in the refrigerator for up to a week in a paper or plastic bag stem side down to prevent moisture development. When cooking cauliflower, sulfur compounds will be released. The longer the cooking time, the stronger the odor will be. To reduce the sulfur odor, cook for a shorter time. Cauliflower can be served raw, in soups or stews, steamed, sautéed or even as a substitute for mashed potatoes. To see my recipe for mashed cauliflower, go to my Late Fall Recipes page.