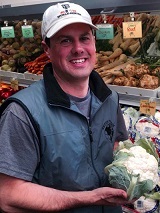 Available now in colors ranging from clean white to rich purple and vibrant green, cauliflower is one of those power vegetables that is so easy to make and so packed with nutrients, it’s hard for me to see it turning into one of the “lost vegetables.”

Through my years of talking with customers on the store floor, I’ve learned that the busier life gets, the less they reach for produce that looks time consuming. Cauliflower tends to fall into that stereotype, but it’s far from time consuming. If anything, picking up a head of cauliflower to prepare at the beginning of the week can lead to many healthy meal options in a matter of minutes.

One of my favorite Sicilian dishes is made with pasta , subtly nutty cauliflower, Parmigiano Reggiano, parsley and anchovies (which are optional, unless you’re a true Sicilian). Just thinking about it leaves me craving a dish of this Sigona family favorite. Plus, the entire dish takes just about the same amount of time to prepare as a basic spaghetti and marinara meal. From time to time I’ll use the colored cauliflower to give the dish a different presentation, too, but we’ll talk more recipes in a bit.

Did you know cauliflower is a cousin to cabbage, kale, broccoli and Brussels sprouts? They’re all members of the same genus and species, Brassica oleracea. Cauliflowers were once referred to as crucifers, a name assigned because the plant’s four-pedaled flowers resembled a cross. The edible part of the cauliflower plant, known as the head or curd, has a subtly sweet and nutty flavor that becomes surprisingly richer when cooked or roasted. Cauliflower takes on the flavors of the foods surrounding it when cooked, while some other vegetables, such as broccoli, keep their powerful flavor no matter how they’re cooked. This characteristic has turned cauliflower into a secret ingredient in some updated dishes, such as Fettuccine Alfredo (stay tuned for a link to the recipe).

There are so many ways to use cauliflower as a super healthy way to put vegetables into your diet. White cauliflower is loaded with fiber, folate, vitamin C and healthy complex carbohydrates, to name a few. The curds of white cauliflower are white simply because they lack chlorophyll and because, as cauliflower grows, their leaves surround the curds and block out sunlight. There’s a science lesson for you!

Cauliflower in varying colors, on the other hand, presents endless aesthetic possibilities and brings even more nutrition to the table…literally.

Orange cauliflower, sometimes called cheddar cauliflower, is colored as such because of the higher levels of vitamin A, or beta carotene, which benefits normal growth, bone development, reproduction and vision. In fact, orange cauliflower contains 25 times more vitamin A than white cauliflower! My nephew Robbie Sigona, our produce buyer, says that the orange cauliflower has a subtle, slightly sweeter flavor than its other colorful siblings.

Purple cauliflower, like red cabbage and other reddish-purple colored produce and flowers, gets its color from the presence of the phytonutrients called anthocyanins, antioxidants that have been linked to a reduced risk of heart disease and cancer, and benefit the brain and anti-inflammation. Who doesn’t like the sound of that? Purple cauliflower reminds me of the time I spent in the 1950s working with my uncles in the produce business. Back then, purple cauliflower was called Venetian cauliflower, and I remember the local farmers bringing in fresh-picked curds, still wrapped in their long leaves – some were almost three feet in length! Now, most cauliflower leaves are trimmed back and the curds are cello wrapped, though we still have some “naked” cauliflower that’s trimmed, but unwrapped.

As for green cauliflower, there are two types: Broccoflower and Romanesco. Broccoflower, as you I’m sure you’ve figured, is a cross between broccoli and cauliflower. It’s a lighter green – what some may call chartreuse — than broccoli, but its curds are shaped like that of regular white cauliflower. Broccoflower tastes similar to the subtly nutty cauliflower, but gets a little added sweetness from its broccoli heritage. Green cauliflower is high in vitamin C and is a good source of folate, which is plays an important role in growth and the building of new cells. Also, just as the other cauliflower colors, broccoflower is low in calories and contains no fat.

The cool green, also more chartreuse, Romanesco cauliflower, sometimes called Romanesco broccoli, is a cross between several heirloom cauliflower varieties. It gives off a cauliflower vibe, but looks like a different type of produce entirely. Each of its coned, spiked florets are spiraled, versus the cauliflower’s rounded and bumpy florets, and each is a mini, replicated shape of the whole, creating what is called a fractal; now you’ve had a math and a science lesson just from reading this article! Romanesco, whose namesake is Rome, Italy, where it originated, has a more mild flavor and softer texture than raw cauliflower and adds a beautiful, intriguingly unique twist to a veggie platter or side dish.

Cauliflower is easy enough to break into florets for a salad or to steam and top with cheese, but I encourage you to take a look at our featured easy, healthy recipes to experience cauliflower in a different way and help save the “lost vegetables.” From soups to a creamy Alfredo sauce, this vegetable is versatile, easy to use and absolutely delicious. You can find the recipes here.