Nothing evokes images of summer for me more than ears of corn. While most corn in the US is grown in the heartland, I remember fields of corn lining the roads where I grew up on the east coast. The word corn or maize to the Native Americans meant “that which sustains life”. Some of us have always thought of corn as a vegetable, but in fact, corn is a grain–part of the grass family. It is the third most important grain worldwide after wheat and rice. Corn is an important food staple globally, especially in Latin America, Asia, Africa and parts of the Soviet Union.

In the US, corn is the largest food crop. Not only do we use corn for food, but it also has a myriad of other uses including livestock feed, ethanol production, plastics, cooking oils, high fructose corn syrup, antibiotics and alcohol. Industrialized countries grow much of their corn for livestock feed and for industrial raw materials. However, in developing countries, most of maize is grown for human consumption.

There are six general varieties of corn. Let’s start by taking a look at the corn that we consume. Sweet corn, also called “zea saccharata” or “zea rugosa,” is sweet because when picked the natural sugars have not converted into starch. However, sweet corn should be consumed quickly since almost half of its sugar converts to starch after only 24 hours from harvest. Fresh is best! If not using quickly, store refrigerated for up to two days. For a delicious and easy corn dish, try my corn, tomato, and arugula salad at http://www.bettereatingcoach.com/recipe-summer-2011.html. 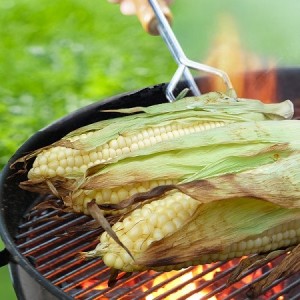 One medium ear of corn contains about 77 calories. Most of the calories come from simple sugars like glucose and sucrose that the body breaks down very quickly, so limiting one’s intake of corn is important for those working on weight loss and blood sugar regulation. Corn has about 5% of the RDA for fiber. Other nutrients found in white corn are vitamins C, B1, B3 and B5 as well as folate, magnesium, phosphorus, potassium and manganese. Yellow corn also has vitamins A and E, providing us with more antioxidants. The antioxidants found in corn determine the expression of the corn color. These antioxidants support healthy mucus membranes, skin and eye health. For more about the benefits of antioxidants, see my article http://www.bettereatingcoach.com/61913-nectarine-nutrition.html. One particular antioxidant found in corn, ferulic acid, may help in cancer prevention, anti-aging and lowering inflammation. While corn is a gluten-free grain, it is also a common food allergen.

Even though corn contains B3, also known as niacin, it is in a form that is biologically unavailable for our bodies to use. Early settlers who were eating a predominantly corn-based diet didn’t know about this aspect of corn and developed pellagra, a B3 deficiency disorder. In order to unbind vitamin B3 and make it available, Latin American cultures cook corn with an alkaline lime solution releasing the bound B3. Hominy, tortillas and tamales are all foods that incorporate the lime solution to allow B3 to be readily absorbed.

A medium ear of corn contains some protein—about 8% of the RDA—but it is an incomplete protein source as it is deficient in two important amino acids. To obtain a “complete protein”, corn should be combined with legumes such as beans to obtain all the necessary amino acids. The oils in corn are high in omega 6 fatty acids. Thus, they may be inflammatory in nature. Corn oils are polyunsaturated and can turn rancid easily. For more about fats, see my article http://www.bettereatingcoach.com/articles.html.

Dent corn is used as livestock feed and industrial products. It has a completely different texture and taste to the sweet corn we consume. It is starchier and the kernel is indented when mature. Flint corn is similar to dent corn. Sometimes called Indian corn, it has a range of colors from white to red. Flour corn is used in baked goods since the corn kernels are soft and starch-filled. Due to its softness, the kernels are easy to grind into flour. Flour corn was one of the earliest forms of corn used by the Native Americans. Finally, popcorn is a type of flint corn with a soft center and hard exterior. When heated, the moisture in the kernel steams and with enough pressure, the kernel explodes resulting in popcorn. Remember most calories in popcorn come from the butter that people put on it rather than the kernels themselves. For an interesting analysis about the industrialization of corn, watch the movie “King Corn”.

As summertime is corn season, enjoy those sweet cobs but in moderation. Combine corn with other more nutrient dense foods to obtain the full complement of vitamins, minerals, and maintain blood sugar balance.