The costumes are being prepared, the jack-o-lanterns are being carved and the trick-or-treat candy is being bought. It can only mean one thing: Halloween is around the corner. Halloween, or All Hallows’ Eve, originated as a remembrance of the deceased. The jack-o-lantern was a symbol to ward off evil spirits. In more modern times, the symbols of Halloween, such as gourds in all shapes and sizes, cornhusks and hay bales, are associated with the harvest.

Typically, pumpkins and apples are common foods around this time of year. I remember Halloween parties where we would bob for apples. Candied apples were a treat given to the kids. Fear of tampering and contamination has reduced this old tradition. Besides apples, pumpkins are probably the primary food that is associated with Halloween. Pumpkins are everywhere — in the supermarkets, by your front door and in the foods we make in October and November.

Pumpkins are members of the squash or gourd family that also includes cucumbers, winter and summer squashes, and melons. Pumpkins have a range of shapes, sizes and colors. In fact, the largest pumpkin of 2013 just weighed in at 2,032 pounds! One would need a forklift to move it around. The name “pumpkin” originated from the Greek meaning “large melon”. As pumpkins are native to Central America, they were a staple in the Native American diet. Pumpkins typically have orange or yellow skin. The coloration is due to the pigments found in the skin and pulp. Like almost all winter squashes, the skin of pumpkin is inedible. But the pulp has a mild and sweet flavor. 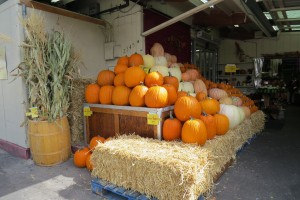 Come to Sigona’s to find that perfect pumpkin

The pumpkin’s orange and yellow colors are due to antioxidants, specifically beta-carotenes. In fact, there are an exceptional amount of these carotenes found in pumpkin. The carotenes possess strong antioxidant properties. Antioxidants help protect us by neutralizing free radicals that are formed from our own metabolism as well as from environmental toxins. Antioxidants are associated with protecting us against heart disease and the development of type II diabetes. In addition, according to the National Cancer Institute, beta-carotenes may aid in the prevention of cancer development. The National Institute of Health (NIH) recognizes that food sources of beta-carotenes support our bodies better than supplements, possibly due to the other synergistic antioxidants found in food sources. The carotenes also support our immune system by increasing the production of T cells that fight off disease. For more about boosting your immune system, see my article http://www.bettereatingcoach.com/10713-dont-fall-for-falls-bugs.html. There are more than 600 known carotenoids but only a handful that we may have heard about such as beta-carotene, lutein, and zeaxanthin.

In humans, beta-carotene is converted to vitamin A. Pumpkins possess one of the highest levels of vitamin A with about 246% of the RDA. Vitamin A is supportive of our skin, our lungs and our mucous membranes. For more about skin health, see my article http://www.bettereatingcoach.com/81413-super-summertime-skin.html. Vitamin A is also associated with eye health and good vision. Just like pumpkins, orange-colored foods such as carrots, sweet potatoes, and other squashes are high in vitamin A due to the beta-carotenes. Keep in mind that the vitamins found in crops may have triple the amount of nutrients when consumed in season (for pumpkins, it is the fall) and when they are produced locally.

Pumpkins also contain fiber. A one-cup serving of pumpkin has 3 grams of fiber. Most of the US population doesn’t consume enough fiber so eating high fiber foods will have a positive impact. Fiber helps in improving our good cholesterol levels by escorting the LDL or bad cholesterol out of our bodies. In addition, fiber aids in reducing the amount of food we eat and thus can help in weight loss. Other nutrition facts about pumpkin: it is low in calories—one cup of unadorned pumpkin is only 49 calories. Pumpkin contains no saturated fat or cholesterol. It is also a good source of vitamin C, some of the B vitamins, potassium, iron, calcium and copper.

Not only is the flesh full of nutrients but also the pumpkin seeds are edible and a wonderful source of protein, minerals, vitamins and omega 3 fatty acids. As the seed is the growth vehicle for the new pumpkin, it concentrates the essential needs of the new plant into this small packet for it to grow. Pumpkin seeds are an excellent source of dietary fiber and good fats. Try to include them in salads or as an easy snack. You may even find small packages to give out as a healthy substitute for candy.

When buying pumpkins, choose ones that are firm and feel heavy for their size. The skins should be hard and dull, not glossy. If it is mushy, it is a sign of rotting inside. Store pumpkins away from light and extremes of temperature until ready to use. They can be stored for many weeks at room temperature. Pumpkins can easily be substituted for butternut squash in recipes. Soups, stews, muffins and pies are all ways to incorporate pumpkin into your food. Also simply baking pumpkin cubes drizzled with some olive oil is a healthy way to eat this delicious fall staple. For a delicious stew recipe, try my squash and chicken stew at http://www.bettereatingcoach.com/recipe-fall-2012.html.

Enjoy the goblins and witches wandering about and try giving some healthier treats or coins to the kids this year. Happy Halloween!