The Root of All That’s Ginger

Gyin-thot. Salabat. Kimchi. Beni shoga. Or some more familiar foods–Ginger ale, gingerbread, ginger tea and ginger beer. Ginger has been used for thousands of years both as medicine and in cuisine. Ginger’s family name is zingiber officinalis. Ginger is derived from the Sanskrit name “singabera” meaning “horn-shaped.” The ginger family also includes turmeric, cardamom and galangal root. All these spices thrive in tropical climates. Except for cardamom, which is a seed, the other spices are all roots. Ginger and turmeric are both rhizomes or rootstocks where the roots grow out from an underground stem.

Ginger has been a staple in Chinese medicine for over three thousand years. In fact, traditional Chinese medicine describes ginger as “restoring yang” and “expelling cold.” It is a warm spice and believed to cleanse the body of toxins. Its therapeutic properties are wide-ranging throughout the body. One of its better-known benefits, recognized in both eastern and western medicine, is as a natural therapy to relieve nausea either from motion sickness or morning sickness without any drug side effects. Ginger aids in reducing flatulence (intestinal gas) as well as stomach pains and diarrhea. Ginger’s digestive benefits may explain why pickled ginger traditionally accompanies raw fish used in sushi and sashimi.

Therapeutic uses of ginger include: 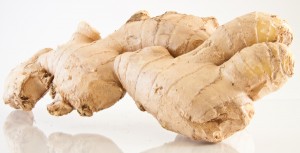 Ginger root is a knobby root that has a thick light brown skin that should be peeled before use. Inside, the flesh may be yellow, white or red depending on the variety. As a spice, ginger has been added to many Asian foods. It arouses the senses. It is a powerful pungent spice that “heats your insides.” Its unique aroma stimulates the olfactory glands. Ginger mellows with cooking. When used in its dried or powdered forms, the taste will be different. One teaspoon of fresh ginger only has one calorie so don’t be afraid to add it to dishes. It contains both vitamins B5 and B6 that are needed for the body’s energy production. In addition, it also contains potassium, magnesium, manganese and copper.

Ginger has a high ORAC score indicating that it has high antioxidant properties. For more about antioxidants, see my article, “Spice It Up.” Some of ginger’s powerful properties are due to these antioxidants, specifically gingerols. They are anti-inflammatory in nature, which may explain ginger’s ability to ease pain from arthritis. The gingerols also protect against free radicals. Gingerols also are responsible for many of the other properties listed above.

To prolong the life of fresh ginger, place it in a plastic bag with as much air removed as possible. It can then be refrigerated up to a month. Use fresh ginger if possible to get the maximum flavor and nutritional benefits. If using ground ginger, keep in mind that powdered spices only last for about six months before they lose their potency. Besides mincing fresh ginger to add to stir-fry dishes, slices of ginger can be added to hot water to make ginger tea and added to chicken stock to augment their use as “Jewish penicillin.” For a delicious recipe using ginger, try my Tree of Life Stir Fry recipe. Ginger slices may also be added to footbaths to improve the skin and fight discoloration and the effects of aging.

Note that those with a bleeding disorder or those on blood thinners should avoid ginger. Also since ginger stimulates bile flow, care should be used if you are prone to gallstones.

Enjoy this wonderfully flavored spice and reap its powerful benefits!