Tips for Healthy Living: The Goodness in Gourds

Orange is the color of the season. Have you driven to Half Moon Bay and seen the pumpkins growing by the side of the road? Zucchini and the other summer squashes are past prime. Now the winter squashes are taking their place in the market with a wealth of choices. Varieties include butternut, buttercup, acorn, red kuri and kabocha to name a few.

Squashes are part of the same Cucurbitaceae family as melons, zucchinis, summer squashes and pumpkins. They originated in the Americas and were a staple food for the Native Americans for over 5000 years. The early European settlers expanded the reach of winter squashes across the Atlantic.  The winter squashes come in a variety of shapes, colors and sizes. Almost all varieties have a thick, inedible skin with a hollow seed cavity for the fully developed seeds allowing the squash to be stored for long periods of time. Even though they are called “winter squash”, they are at their prime during autumn. Unlike summer squashes that need to be consumed quickly, winter squashes with proper storage can be eaten all winter long.

Winter squashes are very low in calories and fat. They do possess dietary fiber but it is the vitamin A level in some varieties where they really provide benefit. Pumpkins, butternut squash and hubbard squash all have excellent levels of vitamin A in the form of beta-carotene. For instance, 100 grams (about ½ cup) of cooked butternut squash has 223% of the daily value (DV) of vitamin A. Vitamin A functions throughout the body supporting our vision, skin, mucous linings and immune systems.  Beta-carotene, an antioxidant, also plays a role in neutralizing free radicals resulting in a lowered risk of developing cancer. Beta-carotene has also been associated with improved cardiovascular health and reducing the symptoms of inflammatory conditions such as asthma and forms of arthritis. For more about vitamin A, see my article “Gourds and Goblins.” The winter squashes also contain other antioxidants such as lutein, zeaxanthin and alpha-carotene.

In addition, winter squashes are an excellent source of vitamin C and a good source of potassium. Vitamin C in combination with vitamins A and E is a potent trio of antioxidants. As cold season is approaching, research has shown that vitamin C acts to reduce the length of colds.  For more about vitamin C and boosting your immune system, see my article “Don’t Fall for Fall’s Bugs.” Other nutrients found in winter squash are vitamin K, manganese, magnesium, copper and the B vitamins including folate. Winter squash also contains some omega 3 fatty acids known for their anti-inflammatory properties.

Here is a sampling of a few types of winter squash and some of the most prevalent nutrients found.  Percentages are DVs.

As you can observe, each type has a unique composition of nutrients. Experiment eating different varieties to ensure that you obtain as many beneficial nutrients as possible. From the table above, butternut squash has a fuller complement of nutrients. In addition, different squashes possess between 5-12% protein. Although squash has a high amount of complex carbohydrates and can taste sweet, the winter squashes have been found to be beneficial to those working on blood sugar regulation issues.

As mentioned earlier, these winter squashes have a longer shelf life. They can be stored for 2-3 months at room temperature or for up to 6 months in a cooler (55 degree) room. In terms of cooking, baking winter squash is best to retain its beta-carotene and bring out the sweetness of the squash. Steaming is preferred to boiling to retain more nutrients. All varieties can be pureed. The winter squashes freeze well as long as they have been cooked first.

Winter squashes can be prepared in many different forms. They can be broiled with some olive oil, placed in stews, made into a delicious bread or pie, be a substitute for pasta or be the highlight of a comforting soup. For a delicious recipe, check out my Squash and Apple Soup.

Here’s to all that’s orange and the benefits they impart. Love your orange and GO GIANTS! 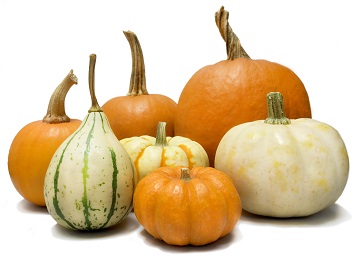