In the Kitchen with Sigona’s Featuring: In-Season Tomatoes

Panzanella is a salad starring crusty or day-old bread and tomatoes. It used to be known as a poor man’s dish, but now it’s a trendy delight. Adding capers or kalamata olives adds just the right burst of flavor to these classically combined ingredients. Serves 4 to 6. 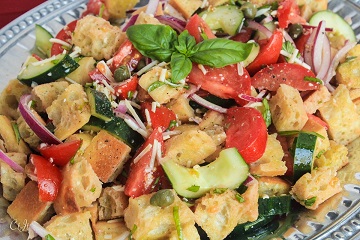 Directions: Panzanella requires stale bread. To get the right texture, either cut the cubes and leave them out overnight to become stale, or toss with 2 tablespoons olive oil and toast at 275°F for about 20 minutes or until lightly toasted. Allow to cool before using in the salad.

In a small bowl, whisk together the vinegar, olive oil, salt and pepper.

In a large bowl, combine the bread, tomatoes, cucumbers, onions and capers. Pour a bit more than half of the dressing over the salad ingredients and toss to combine. Add more dressing if desired, but don’t not enough to make the bread too soggy right away. Add the basil and cheese, gently toss to coat.

Finish the dish with bit more salt and pepper, to taste, and garnish with whole basil leaves and a sprinkling of cheese. Serve immediately, adding more vinaigrette as desired.

There are so many layers of flavor in this tiny bite! The peppery arugula pairs nicely with the earthy mushrooms and the acidity of the roasted tomatoes. Roasting brings out the natural sweetness of the tomatoes and intensifies their flavor. Adapted from Clean Eating. Makes 8 to 12 pieces, serves about 4. 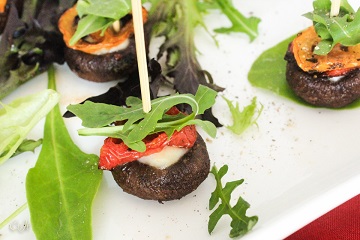 Directions: Preheat and oven to 425°F.

Line a rimmed baking sheet with parchment paper. In a large bowl, combine sliced tomatoes, 1/2 teaspoon oil, 1/2 tsp. vinegar, 1/2 teaspoon basil, 1/8 teaspoon cumin an 1/8 teaspoon salt. Toss together and spread along the middle of the parchment, leaving about a 3 inch edge around all around the edge.

Remove the tomatoes from the sheet and set aside. Turn the mushrooms back over to be stem-side-up, and stuff each with a cube of mozzarella. Return to the oven for 2 to 3 minutes or until cheese is melty.

Top each mushroom with one or two slices of tomato. Gently bend a leaf of arugula in half and thread onto a toothpick. Skewer the mushroom tower with the toothpick so the arugula is on top of the tomato.

Spread a little spring mix on a serving platter. Place the skewered mushroom bites atop the mix and season with a little pepper. Serve warm.

The savory granola, infused with our basil oil, gives this dish crunch as well as flavor, and the lemon in the ricotta makes for a refreshing note, complementing the tomatoes. You’ll have extra granola left over, which is a nice alternative to croutons on salads. It can be stored in an airtight container for up to 3 weeks. Adapted from Food & Wine. Serves 2. 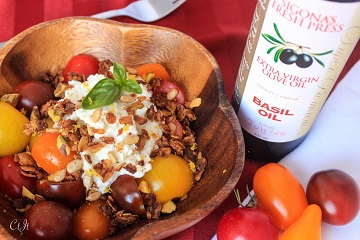 Directions: Preheat the oven to 325°F and line a rimmed baking sheet with parchment paper.

In a large bowl, toss the oats with the honey, water, 2 tablespoons basil oil and salt, to taste. Stir together until the oats are thoroughly coated. Spread the mixture out on the parchment paper and bake for about 25 minutes, stirring twice. Stir in the pistachios and sunflower seeds and bake for about 7 minutes longer until the mix is golden brown and dry. Allow the mixture to cool on the baking sheet while you prepare the rest.

In a small bowl, mix the ricotta with 1 teaspoon lemon zest, the lemon juice, 1 tablespoon basil oil, salt and pepper.

Place the tomatoes in individual serving dishes and season with salt and pepper. Scoop half of the ricotta mixture into each bowl around the tomatoes. Sprinkle the dish with some of the granola, as much as desired. Garnish with the remaining lemon zest and a basil leaf. Serve.