In the Store with Sigona’s Featuring: Just Enough Heat to Wake Up Your Palate: The Friendly Poblano Pepper 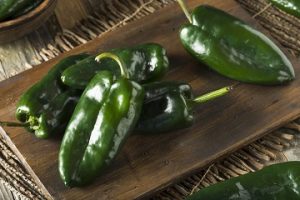 Just Enough Heat to Wake Up Your Palate:
The Friendly Poblano Pepper

Cinco de Mayo is around the corner, and some of us are already thinking about planning a fiesta for family and friends.  One of the staples of Mexican cooking, the poblano pepper, is a friendly pepper that offers up just the mildest kick of heat – which makes it a great way to introduce your friends to some incredibly flavorful festive fare.

Originating in the inland Mexican state of Puebla, just east of Mexico City, poblano peppers have earned a place in Mexico’s culinary pantheon. Chances are good that you’re familiar with mole poblano, the savory, spicy chocolate sauce so rightly famous in Mexican cooking.  It originated in Puebla.

And one of the most famous dishes in all of Mexico is chiles en nogada, the gastronomic star of Mexican Independence Day, celebrated every September 16 (and having no connection to Cinco de Mayo – so let’s retire that old misconception, now and forevermore).  The chile en nogada is a stuffed, battered-and-fried poblano chile, enrobed with delectable creamy walnut sauce, then dusted with pomegranates and chopped parsley.  Created around the time the Mexican flag was established, its signature colors are the same vibrant red, white, and green.

A Poblano by Any Other Name…

…is not necessarily a poblano pepper.  You might hear the terms pasilla and poblano used interchangeably – even at the supermarket.  They are two different peppers. The poblano is wider and appears somewhat heart-shaped, compared with the thinner, more elongated pasilla pepper.

Poblano peppers are among the mildest of the capsicum family, roughly similar to pasillas, peppadews, and Anaheim peppers.  Only bell peppers, banana peppers, and pimentos are milder. Heat is measured in Scoville Units for the amount of capsaicin, the component that gives peppers their strength.  The poblano comes in at a rather humble 1,500-2,000 SCUs. Compare that to the habanero at 250,000 – or the ghost pepper at a whopping one million SCUs!

Of course, perceived heat is always a matter of tolerance and personal palate.  The restaurant appetizer that makes tears run down my cheeks as fast as I can ask for some bread or crackers is the same dish my husband will describe as ‘pleasantly warming.’

It’s probably most useful to figure out one’s own sensibilities – and sensitivities – around these things.

With Poblano peppers, look for firm texture and dark, smooth skin with a nice sheen.  Green peppers will taste milder than their red counterparts.

When you’re working with it, it’s not a bad idea to wear gloves.  There’s a lot of heat in the seeds and the ribs – so if you want to keep it mild, remove them.  If you want to add a little kick, leave them in.  Even though they are relatively mild, take extra care not to touch the area around your eyes while you are working with them!

They’re superb for stuffing (as in the classic dish, chile rellenos poblanos), for mincing into salsa, or roasting, either in the oven or on the grill.