In the Store with Sigona’s, Featuring Bell Peppers 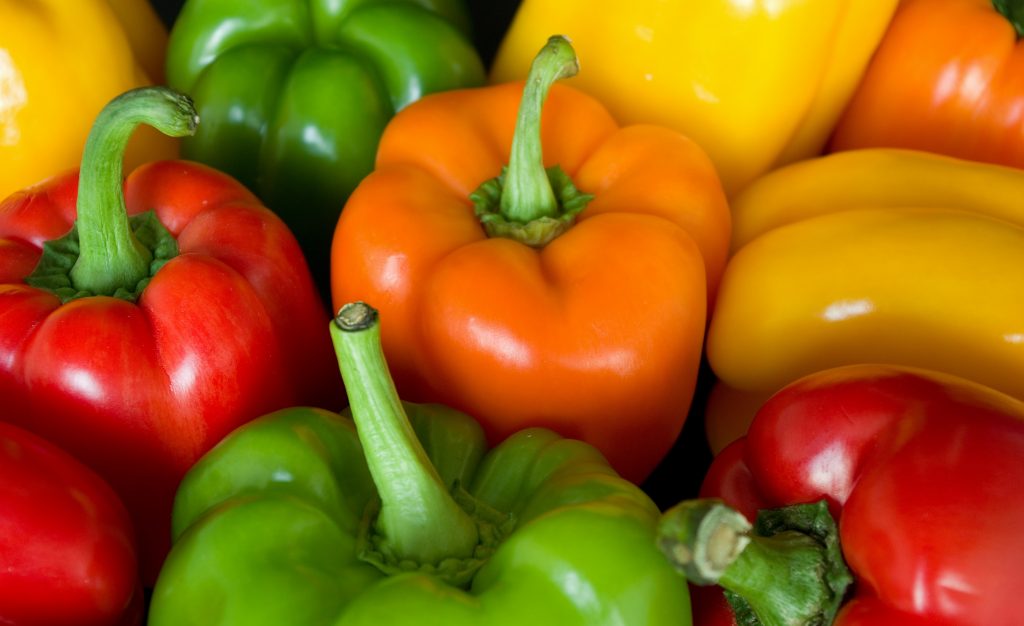 Bell peppers, also known as sweet peppers, are healthy, crisp, and bursting with vitamin C.  Sweet and mild, they have no heat compared to their hotter cousins, though they are related botanically.  On the Scoville Heat Scale (where jalapeno ranges from 2,500-8000 SCU and ghost chilies come in at 855,000-1,000,000), bell peppers score a big fat zero, thanks to the fact that they contain no heat-producing capsaicin.

A Moment of Science

Left to ripen naturally, most green peppers will change color into a gorgeous crimson.  They can be enjoyed at any stage of ripeness. (Many growers plant different cultivars of the same plant to achieve their desired color result.)

Green peppers get their color from the presence of chlorophyll. They’re terrific to eat as they are – as anyone who enjoys them knows.  Classic preparation favorites include

As green peppers ripen, chlorophyll breaks down and gives way to other pigments, primarily carotenoids.  (By the way, even the most brilliant green pepper still has some carotenoids, but in very small amounts.)

Yellow peppers have more lutein and beta-carotene, carotenoids we associate with egg yolks and carrots, respectively.

As a pepper continues to ripen from green to red, it becomes milder and sweeter-tasting.  During this process, two other carotenoids, (capsorubin and capsathin) are produced.  What’s remarkable about these two compounds is that red bell peppers are among the few plants that can synthesize them.

From the Rumor Desk

Turn over a bell pepper and you’ll likely see either three lobes or four.  We’ve heard knowledgeable-sounding people declare quite definitively that one is male and the other is female.  Let’s put that old canard to rest.  It’s not true.  More importantly perhaps, it has no bearing on taste.  (By the way, some peppers have as few as two lobes and some as many as five.)

Look for smooth skin with no soft spots and no withering on the stem. Check Robbie’s Produce tips for more good ideas.

They are wonderful on the grill, in crudité, in salsas, sautéed, stuffed, or one of our favorite preparations – roasted for a high-octane flavor boost. Roast some cut-up red peppers till the skin blackens and blisters. Plunge them into an ice bath and the skins will peel right off.

Layer them on a turkey sandwich with crisp lettuce and sweet onion. Or stuff them into a pita pocket with hummus, parsley and sliced cucumber.