Great bread, no gluten. No kidding. 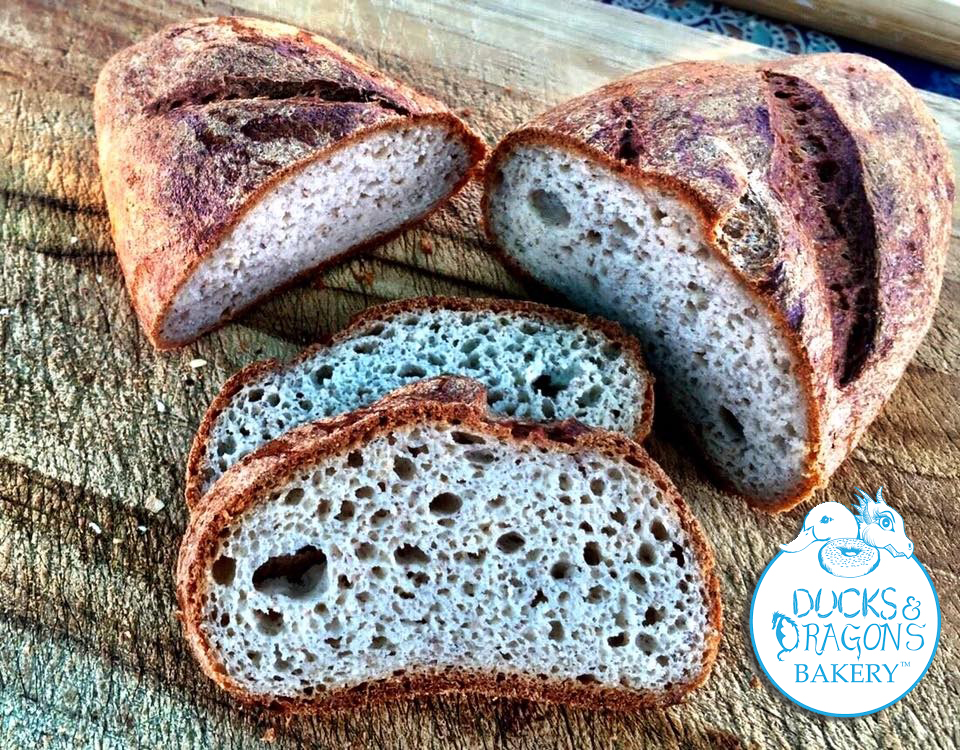 Great bread, no gluten. No kidding.

I’m one of millions of Americans who avoid gluten.  In my case, it’s a genetic sensitivity.  (Thanks, ancestors.)  Too bad that genetic marker didn’t also take away my occasional craving for some bread, torn off a fresh-baked loaf and slathered with butter, steam rising from the bread and the butter melting golden and warm.

I miss bread. Unfortunately, most of what’s gluten-free isn’t anything I’d call bread.

Finding that perfect bread – satisfying taste and a perfect crumb – is as big a challenge to bakers as it is to consumers.  We’ve found a bakery partner who has achieved just that: Ducks & Dragons of San Carlos.

While many of us are still fast asleep, Ducks & Dragons delivers their delectable breads to us, fresh out of the baker’s oven.  We take delivery four mornings a week:  every Monday, Tuesday, Thursday and Friday around 4:00 a.m.

First, the bread: Baker Mina Makram uses a blend of almond and coconut flours. That means fewer carbs, more protein, and more fiber than a similar amount of grain flour (which makes it Paleo-friendly too). To this, he adds eggs, flaxseed, yeast, psyllium husks, salt, and xanthan gum, as well as tapioca and arrowroot flours.

Not only is theirs a dedicated gluten-free kitchen, they’ve also banned other ingredients that typically pose problems to people with food sensitivities or allergies:  no corn, no soy, no grain of any kind is allowed in the kitchen; nor are GMO ingredients.  And with the exception of their cheddar roll, no dairy is used in their recipes either.

Because there are absolutely no preservatives in Mina’s recipes, Ducks & Dragons bread will stay fresh at room temperature for a couple days. If you want to keep it longer (we’ll bet you’ll eat it pretty fast, though!), you can freeze it for up to six weeks.

There’s a personal story behind Ducks & Dragons. Five years ago, Makram weighed 400 pounds.  He was so out of shape, even short walks at work would leave him sweating. He made a decision to change. First he learned to ride a bike. Then he started to work out at the gym, and overhauled his diet.  The regimen that worked for him was a lower-carb plan. But it meant losing out on the baked goods he loved, and he wasn’t willing to give them up.

So he began to experiment.  What began as a quest to create a worthy lower-carb pancake is now a dedicated gluten-free bread and bagel bakery he runs with his girlfriend Kim (they met at the gym).

Oh, and about the name: it’s in honor of Kim and his mom, two of the most important women in his life.  Both of them have been instrumental in, and supportive of his efforts. Kim, as it turns out, is very fond of dragons. And ‘Ducky’ is his mom, her nickname an endearment from his dad.