In the Kitchen with Sigona’s Featuring: Pears

Simple and elegant, pears and brie are a lovely combination. Comice pears hold up when sliced as the variety tends to be more crisp than others, so they work well for dipping or spreading with a warmed brie. Honey adds another sweet layer of flavor to this appetizer or after-dinner dish that will put a smile on the faces of your guests. 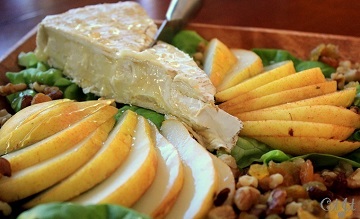 Directions: Preheat the oven to 350° F. Place the brie on a parchment-lined baking sheet and bake for 5 to 7 minutes, or until it starts to ooze but not melt.

Place the warmed brie on top of some butter lettuce on a serving dish. Fan out the pear slices on the sides of the brie. Fill in empty areas with raisins and nuts. Drizzle the brie with honey. Serve warm.

The pear, sweet pepper and ginger give this chutney a sweet heat with a little southern twist. This chutney can be used on a cheese plate, on top of pork chops or steak or even spread inside a panini. Serves 2 to 4. 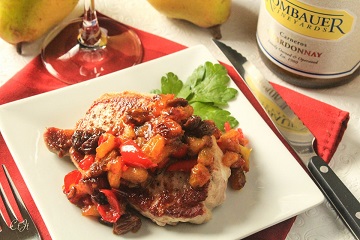 Meanwhile, season the pork with salt, pepper and garlic powder. Allow to sit on the counter for at least 15 minutes to take the chill off before cooking.

Add about a tablespoon of oil to a large skillet over medium-high heat. Add the pork, placing them in the pan so they don’t touch (cook in batches if necessary), and cook until golden brown on one side before flipping, about 4 to 7 minutes, depending on the thickness of the chop chosen. Flip and cook the other side until golden brown and cooked through, about another 4 to 7 minutes. The National Pork Board recommends cooking pork chops, roasts and tenderloin to an internal temperature between 145° F (medium rare) and 160° F (medium), followed by a 3-minute rest.

To serve, plate the pork and spoon some of the chutney over the top. Enjoy.

Sweet potatoes and pears are great foods to introduce to babies as they enter the world of solids, and mixing the two together makes for a new taste sensation. Adding pear to a sweet potato puree adds a little more sweetness, helps thin the consistency and bumps up baby’s intake of fiber, potassium and Vitamin C, nutritional benefits also found in sweet potatoes. 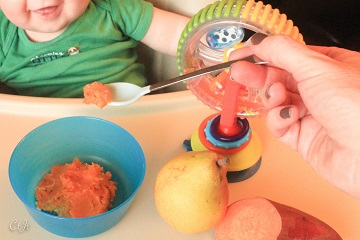 Pear Puree: Peel, core and dice a pear. Place it in a steamer basket situated over a little water in a pot fitted with a lid. Steam over medium-high heat for about 8 to 10 minutes or until tender. Allow to cool a couple minutes.

Place the pear and a teaspoon or two of the steaming water in a food processor or blender; process until smooth.

Sweet Potato Puree: Prick sweet potatoes all over with a fork and place on a foil-lined baking sheet. Roast in the oven for 45 to 60 minutes until they are tender throughout. Remove from the oven and allow to rest until cool enough to handle.

Slice sweet potatoes in half lengthwise and scoop out the flesh into a food processor. Process until smooth. If necessary, add a teaspoon or two of water. Remove any long, tough fibers.

To store the remaining puree, scoop 1 tablespoon into each cube of an ice-cube tray, then freeze to make for easy access and portioning.