In the store with Sigona’s featuring In the Pink: Rio Star Grapefruit 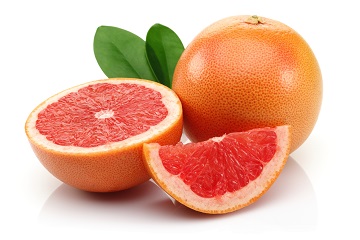 In the Pink: Rio Star Grapefruit

Looking for a bit of sunshine in the midst of the heavy, flat-lead grey skies we’ve endured the last few weeks?  While we don’t have the power to bring back Our Mr. Sun on demand, we can offer some sunny citrus to brighten your day.

Our Rio Star grapefruit is the pick of the season, and the peak of perfection. It is sweet, juicy, tree-ripened and hand-picked.  And because it keeps so beautifully on the tree, each fruit is, quite literally, stored on the branch until it’s time to be picked and come here to Sigona’s.

Fruit, Yes. Grape, Not So Much

Grapefruit is the only citrus fruit believed to originate in the Caribbean (some sources say Barbados; some claim Jamaica).  While its location of origin may remain in dispute, there is agreement on one thing: the grapefruit is a cross between a pummelo (which some call an old-fashioned grapefruit) and a sweet orange.

Even its name seems a misnomer:  it’s citrus, not a berry. It grows on a tree, not a vine.  And its gargantuan size dwarfs even the largest globe grape.  It was a Jamaican farmer who named it ‘grapefruit’ in the early 1800s because it grows in clusters, just as grapes do.  It’s kept the name ever since, despite efforts at change – first by horticulturalists (complaining the nomenclature is misleading), and later by an industry trade association in an attempt at re-branding.  Both times, the public outcry was too great to support the change.

You already know grapefruit is high in vitamin C, but did you know the pink variety has  high amounts of vitamin A?  It also contains healthy amounts of lycopene. Just like strawberries, watermelon and tomatoes, that red pigment is a good clue to the presence of lycopene – which is good for heart health, prostate health, and preventing certain cancers.

A composed salad of grapefruit sections with avocado and mint makes a refreshing first course.  It offers striking contrasts in at least three gustatory areas: color on the plate, tastes on the palate, and mouth feel – that elusive, important quality sought by chefs and aspiring cooks alike.

Or simply peel a grapefruit like an orange, and put the sections into a bowl.  It’s a bit messy to prepare, but worth it: a bowl filled with pure, sweet grapefruit goodness – no pith, no membrane, no bitterness.  Best of all, you don’t lose even one plump juice vesicle.