In the Store with Sigona’s Featuring: Nopales, an early superfood 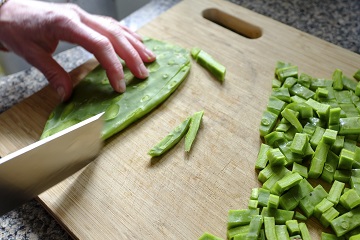 Some people are always on the watch for the next superfood. The food we’re featuring here at Sigona’s this week isn’t the next new thing; it goes back centuries. It’s just as versatile now as it was then. The Aztecs revered it so much they called it the fruit of the earth. They used it for food, for medicine to bring down fevers, as lip balm, combat infections, aid digestion, and even curb rage. It’s so important in its native Mexico that it is depicted on the national flag. And it was a favorite of the artist Frida Kahlo.

Our feature this week is nopales, that wide flat cactus pad you often enjoy with Mexican or southwest cuisine. And with everyone thinking of lighter, healthier, more flavorful foods, nopales are gaining attention once again. They’re terrific sautéed and used in tacos, scrambled eggs, in soup, or on the side. They can be eaten raw, or juiced for health. If you’re watching your carbs, you can use them instead of tortillas to hold the goodies inside – and they can also be grilled and sliced as a meat replacement for tacos. Plus with Cinco de Mayo coming up this weekend, they are great to include in your party recipes.

The flavor is mild, but intensity can vary from plant to plant as well as from palate to palate. For some people, they are sweet; others find them sour. Many people say its taste is closest to watermelon. Probably the best thing to do is try some and see for yourself!

Some people also call it prickly pear cactus, which can be confusing: the prickly pear is the rosy or purple-colored fruit on the green cactus. The nopales are the cactus pads.

Native to Mexico, nopales are known for Vitamins A and C, as well as potassium, magnesium, and manganese. Like many vegetables, they are great for fiber. According to the Mayo Clinic, there’s preliminary evidence that this food can decrease blood sugar levels for people with Type 2 diabetes. (It’s early research and more is needed, but we thought you should know what we have learned so far.)

Look for bright green coloring and firm skin (no wrinkling).

Thinner pads are younger and milder.

Well-wrapped, they will keep 10-14 days in the refrigerator.

Dice and boil nopales with garlic and onion about 10 minutes till tender. Strain and set aside.  Meanwhile, dice cilantro, tomatoes and fresh jalapeños.  When the nopales have cooled, toss everything. Finish with fresh lime juice and salt to taste.  It’s great over tacos, steak, or even just with chips.

Not just for people…

Nopales are used not only for people, but also for forage, dyes, and even construction.