In the Store with Sigona’s Featuring: Bok Choy 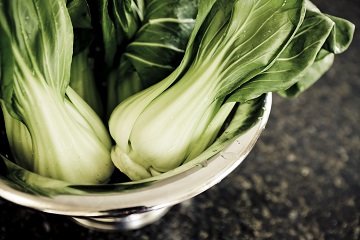 For Chinese New Year – and All Year Long

While it’s not as familiar to non-Asians, bok choy is a staple ingredient in many Asian soups, stir-fries and entrées.

Mid-winter has us thinking of Chinese New Year, which starts Friday, February 16 – the first day of the new lunar month, and the most important holiday of the year. Among the festivities during this two-week period are fireworks, lion and dragon dances, parades and of course, abundant family celebrations.

Parents give children red envelopes with money, often nestled among mandarin oranges. Many families start with a big reunion feast on New Year’s Eve. Like any holiday, customs vary from region to region and family to family. But some things remain constant across all families. Every item on the menu is chosen with a blessing in mind – for example, dumplings to say good-bye to the old and welcome the new; long noodles for long life; seaweed for wealth and good fortune.

One item no table would be without is bok choy, whose name in Chinese means ‘soup spoon’ because of the shape of its leaves. It symbolizes wealth and luck. Specifically choosing baby bok choy, and preparing it whole, adds the wish and hope for long life for one’s parents.

While it’s not as familiar to non-Asians, bok choy, a type of cabbage, is a staple ingredient in many soups, stir-fry and entrées. If you already use it, you know how tender and versatile it is. If you haven’t tried it yet, we hope you will after learning more about why we like it so much here at Sigona’s.

Let’s start with the difference between mature bok choy and baby bok choy.  Both are types of Chinese cabbage. Baby bok choy matures very quickly; at its peak it is only a few inches tall. Bok choy has been cultivated in China for more than 5,000 years, starting with the region around the Yangtze River Delta. Now it’s grown in many places, including here in California. Our baby bok choy comes local from Fresno.

Baby bok choy is crunchy and white near its root, with tender green leaves at its top. It’s available year-round. Its flavor is delicate and mild, and can be eaten raw, sautéed, added to soups or stir-fry.

For a vegetable so low in calories, it’s high in Vitamins A and C, and a good source of fiber. Because it’s low in oxalates (say, compared to spinach) it’s better for calcium absorption than some other greens.

Look for firm white stalks and rich color in the leaves, which of course, should not be wilted, indicating moisture loss and therefore aging since harvest. Wait till just before you plan to use it before washing it, and clean it thoroughly to make sure there’s no grit left between the leaves.
Because it’s so small compared to mature bok choy, there’s no need to cut up baby bok choy. It cooks faster as well. It can be cooked whole, which makes for a very appealing presentation on serving. Because it’s such a mild flavor, it does well with stronger flavors such as ginger, garlic, sesame oil, citrus and mushrooms.