In the Store with Sigona’s Featuring: Fall for Pomegranates 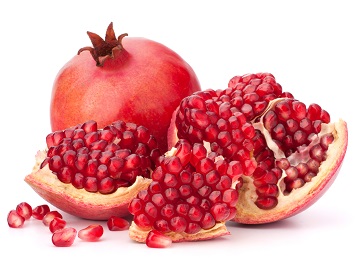 This morning, taking His Adorableness for a late morning walk, we passed a neighbor’s house where a large pomegranate bush grew in the front yard. The sight was the very picture of fall on the Peninsula, a Polaroid moment of RGB colors: scarlet globes of fruit in an artist’s color-wheel contrast to the Kelly green of the shrub, against a brilliant cobalt sky after this weekend’s (much-needed) rains. It was eye candy.

When I was a kid, I’d never seen a pomegranate, much less eaten one.  The only thing I knew about them was that they caused all kinds of trouble for Demeter and Persephone of Greek myth.

Until fairly recently, pomegranates weren’t readily available around here, though now they’re widely cultivated in California and Arizona.  Ours come from Fresno. Like most produce, there are a number of varieties: this one is called Wonderful – and we agree.

The crimson seeds, known as arils, add a sweet and tart burst to salads, jams, dips, and grain dishes.  The juice is equally versatile: you’ll find its natural sugars and soft tannins adding complexity to a pomegranate martini, a juice cooler, and even our own Sigona’s pomegranate balsamic vinegar.

Taking away the exaggerated health claims made in some advertisements,

it is accurate to say that pomegranates contain a high level of polyphenols – the same class of antioxidants present in our Fresh Press Extra Virgin Olive Oils.  They also contain vitamin C and are high in fiber and potassium. A medium pomegranate will set you back about 100 calories.

Though pomegranates flourish best in hot, dry climates like the Central Valley, they can thrive in milder coastal climates as well.  The season runs from September through February – which makes sense if you remember your Greek mythology and how Persephone’s mother, Demeter, mourned for her daughter all winter while they were apart.

Go by weight more than anything else: the heavier a pomegranate is for its size, the more juice (water weight) it will have. Don’t worry about color.  Deeper reds only indicate where the sun has shone directly on the fruit.  Store the fruit on the counter for a couple weeks or more, and up to two months in the refrigerator.  As they ripen, they will ‘square off’ – that is, they will lose some of their roundness and you’ll begin to see the silhouette of the fruit inside.

Some people get intimidated over how to access those precious arils within the fruit.  Not to worry.  There are probably as many methods to remove the seeds as there are seeds in a pomegranate!  Here’s one approach we like from our own Robbie Sigona.  Once you have seeded the fruit, you can eat the seeds out of hand or use them in recipes, such as these created by Carmelo Sigona.

Pomegranate season is just a few months long, but your enjoyment of pomegranates can last the whole year.  You can freeze the arils for later use.  Just spread them on a parchment-lined baking sheet (wax paper will work as well).  Once frozen, put them in a freezer bag. Take them out as needed.