In the Store with Sigona’s Featuring: Local Heirloom Artichokes 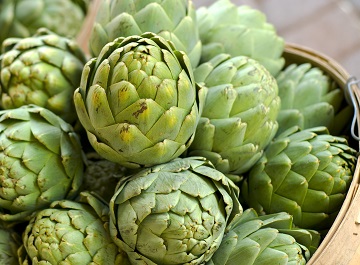 While the word “heirloom” may bring to mind family treasures and antiques, to the foodies, dedicated farmers market patrons and artichoke enthusiasts of the world, this word means the absolute best.

For the next few weeks, we’re featuring heirloom Green Globe artichokes from Pezzini Farms in Castroville. Each artichoke is hand-picked in the morning and delivered the same day to ensure maximum freshness. The only way it could be any fresher would be if you picked it yourself.

These heirlooms are the only artichoke the Pezzinis grow on their 100-acre family farm – and in fact, it’s one of the last farms to grow them. Many other farmers have gone to a newer hybrid, which is a good artichoke, but not nearly as meaty and flavorful as this one.

They truly are a family heirloom: every single artichoke in the store comes from the same root stock that was brought over from Italy and passed down through the Pezzini family farm since they started more than 80 years ago.

Look for artichokes that feel heavy for their size, indicating good moisture content.  The leaves (bracts, actually) should not appear dried, a sign of age. A fresh artichoke will emit a little ‘squeak’ sound when gently squeezed; an older one will not.

Traditionally, they are served steamed or boiled – then each tender bract is pulled off to get the fleshy part where it meets the choke. Some people like to dip it in melted butter; some people prefer an aioli sauce; a few purists declare the delicate bract perfect as is, unsullied by anything else.  A very flavorful preparation – and very Italian – is to stuff each tender bract with a mix of breadcrumbs, Parmesan cheese, garlic and herbs before cooking.  It’s more labor intensive but the result is well worth the effort.

Artichokes are high in fiber – about 10 grams in just one medium artichoke! – and a good source of vitamins C, K, niacin and folate; as well as the minerals copper, magnesium, phosphorus, and potassium.  They’re low in saturated fat and very low in cholesterol.  Of course, this is before the tender bracts are drowned in butter or garlicky mayonnaise – but oh, they taste so good that way!