Tips for Healthy Living: Artichokes From Leaf to Heart

Artichokes have been prized vegetables since ancient times. In some societies, only men were allowed to consume artichokes, which were considered aphrodisiacs. Fortunately, this prohibition has been lifted and all can now enjoy these flower buds. Artichokes originated from the Mediterranean area. The name “artichoke” is derived from the Italian for “pine cone” due to its shape. Artichokes are part of the sunflower family.

We are fortunate to live so close to Castroville – the “artichoke center of the world.” If you drive toward Monterey, you can see field after field of artichokes growing. In fact, Castroville produces almost all the artichokes consumed in the US. Peak artichoke season is March through May. Other countries that grow artichokes include Italy, Spain and France. The edible portion of the artichoke plant is the flower bud that eventually develops into purple florets with an abundance of silvery-green triangular scales. The lower portion of these triangular scales and the heart located near the stem are the edible portions of the artichoke.

While the entire artichoke is not consumed, the edible portions, particularly the leaves, contain health-supporting nutrients. Artichokes are especially supportive of the digestive, biliary (liver), circulatory and skeletal systems. They are low in calories, containing only 47 calories for a medium-sized artichoke. They have no fat but do contain some protein. They also contain important vitamins and minerals, namely vitamins C, K, some B vitamins, calcium, copper, potassium, iron and manganese. In addition, as discussed later in this article, artichokes have some powerful antioxidants.

Artichokes are rich in fiber. One large artichoke can have as much as a quarter of the RDA of dietary fiber. As mentioned in prior articles, dietary fiber aids the digestive system in removal of waste products. The fiber also assists in lowering bad (LDL) cholesterol by escorting it out of the body. Artichokes, just like asparagus, contain inulin that acts as a prebiotic, providing nourishment to our beneficial gut bacteria. These healthy gut flora work symbiotically with us by producing vitamins and assisting in our digestion. For more on fiber and inulin, see my articles http://www.bettereatingcoach.com/31213-spring-forward-with-asparagus.html and http://www.bettereatingcoach.com/22713-not-just-dijon.html.

The compounds in artichokes have an extremely important role in supporting our biliary system. The job of the liver is to filter blood and remove any harmful substances. The liver, in conjunction with the gallbladder, also breaks down (emulsifies) fat into pieces that are absorbable by the cells. To perform this function, the liver produces bile, which is then stored by the gallbladder. When we eat a meal that contains fat, the bile is released from the gallbladder into the small intestine where the fat is broken down and absorbed. By this same process, the fat-soluble vitamins are released and absorbed. 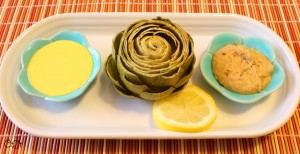 Cynarin and silymarin, two antioxidants in artichokes, help improve liver functions. Cynarin has been shown in studies to increase bile production thereby improving our digestion. If bile flow is blocked, various digestive issues can ensue, including bloating, abdominal pain and constipation. In addition, impaired excretion of bile prohibits toxic compounds from being released by the body. Instead, they are absorbed and can result in adverse health conditions. Silymarin has been used as a treatment for liver disorders for over 2000 years. It has been studied and approved by the German Commission E (group studying the safety and efficacy of herbs) as a treatment to support various liver conditions. It is used to regenerate liver cells, stimulate bile flow of the liver and gallbladder, protect against environmental toxins and even as an antidote for ingestion of death cap mushrooms. Since it is an antioxidant, it neutralizes free radicals that can damage cells exposed to harmful toxins. For more about the importance of liver detox, see my article http://www.bettereatingcoach.com/101712–wine-and-wellness.html.

Silymarin is also being studied for its cancer-fighting abilities. It may be able to reduce the growth of new blood vessels feeding cancer cells (called angiogenesis) and may cause cancer cell death. The literature suggests that it may help in cancers of the prostate, colon, ovaries, skin, lung, breast and cervix. Animal studies with silymarin have shown direct tumor-killing properties. Silymarin may work synergistically with some chemotherapy drugs but more studies need to done.

Artichokes and artichoke leaf extract have both been shown to reduce LDL cholesterol and raise HDL (good) cholesterol. With beneficial effects on cholesterol, artichokes may help in lowering one’s risk of developing atherosclerosis. The fiber mentioned previously plays a role in this process as well. The minerals found in artichokes (high levels of potassium and low amounts of sodium) support our blood pressure and heart rates.

Furthermore, artichokes are high in vitamin K, having about 12% of the RDA. Vitamin K is important for bone formation. See article http://www.bettereatingcoach.com/121112-its-good-to-be-green.html for more info on vitamin K. Vitamin K may also help limit damage of the neurons in the brain, helping those suffering from neuronal diseases such as Alzheimer’s and Parkinson’s.

So how do we eat these vegetables that can look so intimidating? It’s actually quite easy. The best way is to steam them. Steaming will retain the most nutrients. Cut off the stem and trim any sharp leaf tips and use your fingers to slightly open up the leaves. Place artichokes upside down in a pot with a couple of inches of water, a dash of salt and a lemon wedge to retain the green color. Cover and steam for about 35 minutes for medium artichokes and 45-50 min. for large ones. Once done cooking, pull off leaves, dip in sauce (but remember that most calories will come from the sauce) then scrape off base with teeth. Once leaves are eaten, enjoy the heart.

Go ahead and try these springtime wonders with all their health benefits!