In the Store with Sigona’s Featuring: Local Asparagus 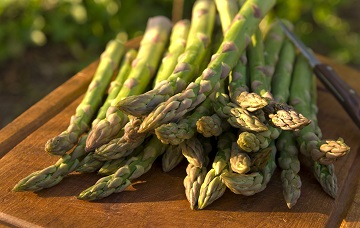 When we think of spring vegetables, we think of asparagus – especially on the grill, where quick high heat brings out the natural sugars in tender shoots. Pureed in a cream soup, it’s equally pleasing as a lovely start to a special meal.

The word, which means shoot or sprout, comes to us from the Greeks of antiquity, who gathered it in the wild and used it as both food and medicine. Their Roman counterparts cultivated it, where it made its way into popular culture. Their version of ‘a New York minute’ was ‘as quick as cooking asparagus.’ (Should you wish to impress your friends with the original Latin as you serve up a plateful fresh off the grill, here it is, attributed to Caesar Augustus: “velocius quam asparagi conquatur.”)

Asparagus lore most commonly centers around its supposed aphrodisiac qualities. Among the more noteworthy: in Victorian times, it was banned from girls’ schools for fear it would lead them astray and into lasciviousness. It also figures in dream interpretation: some believe if you dream about it cut up in a bunch, it’s an omen of tears to come – but to dream of it growing in the fields will bring good fortune.

In the Field: Wait, and Hurry Up

After planting asparagus, growers must wait till the second year to harvest it. But once established, this member of the lily family is very productive: during peak productivity, a single plant can produce spears for 6-7 weeks. Under ideal growing conditions, asparagus can grow as much as 10 inches in a 24-hour period (there are some impressive time-lapse videos online, should you care to take a look).

Asparagus is ideal for the time-stressed cook. It’s fast and easy. To prepare, just bend each spear till it breaks naturally where the fibrous, woody section gives way to the tender green shoot. You can roast, broil, grill, sauté, steam, or boil it. A simple, yet flavor-rich method is to brush spears with olive oil, sprinkle a little coarse salt, and throw them on the grill. It pairs well with just about anything on the grill – in particular, steak, whether it’s beef or salmon.

Treat asparagus the way you would a flower bouquet or a bunch of herbs: cut the bottoms and put them in a jar or glass. Place a loose plastic bag – maybe the Sigona’s bag you put them in when you bought them – and put them in the fridge. But you’ll want to use them soon.

Among vegetables, asparagus has what’s known as a high ‘respiration rate’ — simply put, it loses moisture and nutrients faster than other vegetables. The sooner you can eat it after purchase, the better it is for you – ideally, within two days. You don’t have to go to the extreme of one Connecticut gardener who puts the water on to boil before she’ll pick her asparagus!