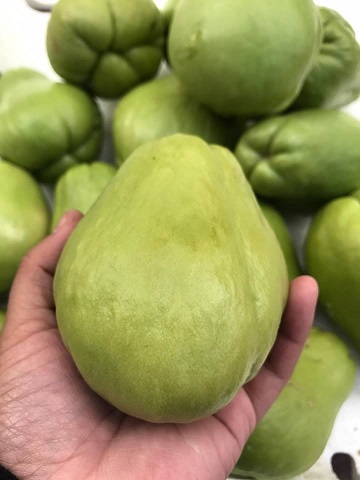 Prevalent in Mexican, South American and South Pacific cuisine, the chayote is a vine vegetable that’s becoming more popular in and common in American markets and restaurants.

Chayote, often wedged, sliced or diced, should always be cooked before eaten. It can be boiled, added to soups, sautéed, steamed or used in salads, and is good served warm or chilled. As for nutritional benefits, it’s very low in calories (about 40 per cup) and is a good source of potassium and fiber.

Carmelo, when preparing Chayote for soups, says he usually slices the squash in half, removes the pit and dices the flesh into pieces before it’s tossed in the soup. If he’s going to prepare it for a salad, he boils the squash whole, lets it cool, then easily peels away the skin. If you choose to peel before boiling, some cookbook authors and produce experts suggest working under running water.

If you’re a fan of the Food Network, you may have seen chayote as an ingredient in recent programs, such as “Mexican Made Easy” starring Marcela Valladolid. She made an appetizer of sliced chayote with an avocado & bell pepper yogurt dip that is a must-try! Here’s the recipe and below are a few more:

This recipe, adapted from Vegetables Every Day by Jack Bishop, introduces bold flavors to the mild chayote, creating a fantastic side dish you can use with seafood, ham or even on Taco Tuesday. Serves 3-4 as a side.

Directions: Place a steamer basket in a wide, deep saucepan. Fill pan with water to reach just below the bottom of the steamer basket. Bring water to a boil and add prepared chayote. Cover pan and steam cook until crisp-tender, about 10 minutes. Remove and set aside.

Chayote pairs well with seafood, and for this recipe, adapted from Uncommon Fruits & Vegetables by Elizabeth Schneider, brings the two together in a soup that can be made hotter if desired. The shrimp and mushrooms made this a filling, warm soup that’s great for chilly days.

Directions: Reserving the shells, peel, devein and half the shrimp lengthwise. Set shrimp meat aside.

Strain shrimp broth, discarding shells and other solids, and return broth to the pot. Add in chayote and simmer until not quite tender, about 5-6 minutes.

Add peeled and deveined shrimp to the broth, along with the mushrooms and 1 tsp. chili paste. Bring to a boil, stirring, until shrimp turn pink. Slowly add in lemon juice, additional chili paste and oyster sauce to taste. Stir in cilantro, if using, and serve.