In the Store with Sigona’s Featuring: Celery 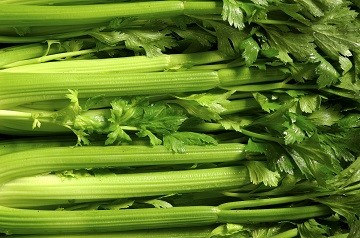 Readers of a certain age may smile at that headline as they remember a very young Doris Day singing that song with Les Brown and His Band of Renown back in 1941. Young readers may think of Bunnicula, the vampire bunny hero of the children’s book, The Celery Stalks at Midnight.

How Good Is Celery?

Let’s start by putting to rest that old canard that eating celery is a great way to lose weight because you use more calories chewing it.  Really?  (Who would want to eat that much celery anyway?)

To be sure, with 95% water, celery isn’t going to be on any thinking nutritionist’s hit parade of micronutrients.  But it will give you some vitamin K, folate, and vitamin C.

Its best benefits are probably in assisting healthy digestion. The research appears promising:  a paper in Pharmaceutical Biology calls out a pectin in celery, apiuman, which may protect the stomach lining against ulcers.  And the University of Maryland Medical Center suggests the flavonoids in celery may reduce so-called ‘bad’ bacteria in the gut, thus reducing inflammation.

Freshly chopped, celery gives a satisfying crunch to chicken, egg, or tuna salad. Cooked, it’s ideal in soups and stews.  Without it, you simply cannot make a good mirepoix (or a Cajun ‘holy trinity’ – both have onions and celery; the mirepoix adds carrots where the Cajun uses green peppers).

Unlike most other vegetables, cooking celery does not deplete it of many nutrients.  Nonetheless, chop it just before using it if you can: it will lose nutrients over time while being stored.

Storage guides suggest using it within 5-7 days of purchase, but if it wilts in the fridge – a sign of dehydration – cut the bottom of the stems and put it in a glass of water.  You’ll lose some nutrient value but it’s still perfectly fine to eat or cook with.

There are some trends that even retro does not want to bring back.

But fresh celery is superb, and so are the recipes in this issue – they are delightful and even a bit whimsical.  Let us know what you think!