In the Kitchen with Sigona’s Featuring: Local Artichokes

Once they’re prepped, artichokes can be used for a variety of dishes in a variety of ways. See the pictures for a step-by-step visual. 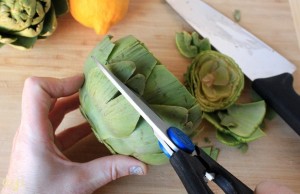 Artichokes can be dressed up, but sometimes they’re best simply served. Heirloom artichokes have a nuttier, richer flavor that shines through when dipped in our garlic oil. Serves 1 to 2. 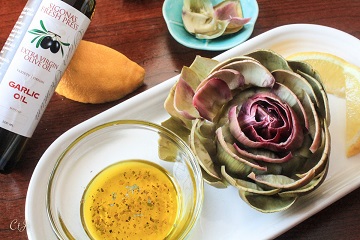 Directions: Prepare the artichokes by removing the smaller, outer and tougher leaves. Trim off the stem so the artichoke will sit upright. Cut off the top fourth of the artichoke and then use scissors to cut off any remaining sharp tips from the remaining leaves. You can either steam the artichoke whole or slice it in half to steam. If slicing in half, use a spoon to scoop out the fuzzy choke, also removing any purple leaves. Rub all cut edges and the hulled middle with a 1/4 slice of lemon.

Steam artichokes, top down, in a steamer basket over boiling water with the remaining 1/4 of a lemon for at least 20 to 30 minutes or until a leaf can be easily pulled off and the heart can be easily pierced with a knife.

Meanwhile, in a small sauce pan, heat the olive oil, salt, pepper and oregano over low heat until the salt dissolves. Pour the oil into a small bowl and serve with the steamed artichoke.

This is no ordinary beef stew, but it’s still as comforting as ever. The artichokes and kalamata olives give this a bit of a Mediterranean twist that could make this dish part of your usual chilly-weather stew rotation. Recipe courtesy of Luisa Ormonde of Luisa’s Catering. Time: 2 hours. Serves 4. 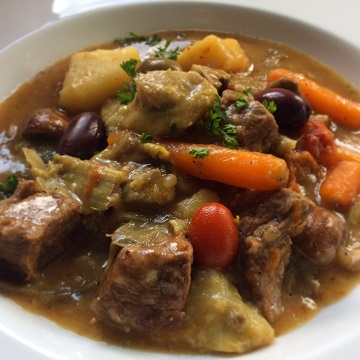 Directions: Begin by preparing the artichokes and mushrooms as directed above.

Season beef with salt and pepper. Shake in a plastic bag with the cornstarch. Remove from bag and brown in oil on all sides in Dutch oven over med-high heat.

Add onion and sauté until soft. Add oregano, carrots, tomatoes, bay leaf and stock. Bring to a boil, cover and then lower heat to simmer for 1 1/2 hours.

After 1 1/2 hours, add the steamed artichoke hearts and sautéed mushrooms. Taste sauce and adjust seasonings if needed. Simmer, covered, for one more hour.

Add olives at the very end of cooking, along with most of the parsley. Ladle stew into shallow bowls and garnish with remaining parsley.

*If a recipe calls for artichoke hearts, prepare the artichoke before steaming by removing all the leaves and saving them for another time. Slice the remaining cup in half top to bottom and then use a spoon to scoop out the fuzzy center.

Artichokes on the Grill 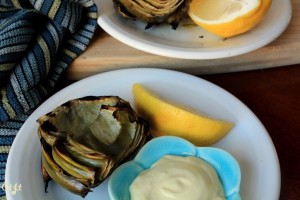 Directions: Prepare the artichokes by removing the smaller, outer and discolored leaves. Trim off the stem so the artichoke will sit upright. Cut the top fourth off of the artichoke and then use scissors to cut off any remaining sharp tips. Slice the artichokes in half and use a spoon to scoop out the fuzzy choke, also removing any purple leaves. Rub all cut edges and the hulled middle with lemon wedges.

Steam artichokes in a steamer basket over boiling water for at least 20 minutes, more if the artichokes are quite large. They are done when the heart can be easily pierced with a knife. They’ll cook further on the grill.

Prepare a grill over medium-high heat. Lightly brush the artichokes all over with olive oil; season with salt and pepper. Place the artichokes on the grill, cut side down. Grill, covered, for 5 to 10 minutes, until nice grill marks appear on the cut sides of the artichokes.

Serve warm or at room temperature with your favorite dipping sauce.

Frittatas are great for any meal and come together in a snap. You can add or remove any veggies you like; asparagus makes a nice addition, as does bell pepper. Serves 6 to 8. 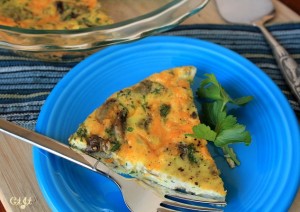 Directions: Remove the stem from the artichokes and peel off the outer later from the stem with a knife or vegetable peeler. Par (trim) down the artichokes to the cups – this means peel off all the leaves and cut out the fuzzy choke so all you’re left with is the heart. Save the leaves for another time (you can boil them along with the hearts to serve with dip later).

Cook the hearts and stems of the artichokes in boiling water for about 10 to15 minutes. Remove and cool. Then chop into smaller 1- to 2-inch pieces.

Meanwhile, lightly beat eggs, incorporating half of the cheese and all the parsley; season with salt and pepper. Beat in a splash of milk, if desired. Set aside.

Over medium heat, warm the olive oil. Add the shallots, season with salt and pepper and sauté for about 3 minutes. Add the garlic and diced artichokes and mushrooms. Stir constantly for several minutes to let all the flavors come together.

Remove from heat and incorporate the eggs. Working quickly, pour egg and artichoke mix into a lightly greased pie or frittata dish.

Sprinkle remaining cheese on top and bake at 325°F for about 30 minutes.

Serve warm or at room temp.

You’ll swoon over the flavors of these artichokes. Really! The artichokes are infused with fantastic flavor from simmering in the stock, and the sauce that’s made from reducing the remaining stock with a bit of lemon juice and zest is superb. You might want to eat the artichokes all yourself. Adapted from NY Times. Serves 6. 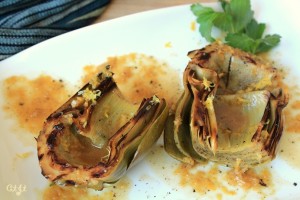 Directions: Prepare the artichokes by removing the smaller, outer and discolored leaves. Trim off the stem so the artichoke will sit upright. Cut off the top fourth of the artichokes and then use scissors to cut off any sharp tips remaining. Slice the artichokes in half and use a spoon to scoop out the fuzzy choke, also removing any purple leaves.

Warm the olive oil very large, deep skillet over medium-high heat. When hot, add artichokes cut side down. Cook until lightly browned, about 3 to 5 minutes. Add stock (it should come about halfway up the sides of the artichokes), bring to a boil, cover; turn heat to medium-low. Cook for about 20 minutes or until tender, checking every 5 to 10 minutes to make sure there is enough liquid in the pan, adding more stock as necessary.

Sprinkle artichokes with salt and pepper and then, leaving liquid in the skillet, transfer the artichokes to a serving platter; set aside.

Raise heat for the skillet to medium-high and cook the stock, stirring occasionally, until liquid is reduced to sauce. Stir in lemon zest, juice and butter; taste and adjust seasoning. Serve artichokes drizzled with sauce.