In the Store with Sigona’s Featuring: Fresh Fennel 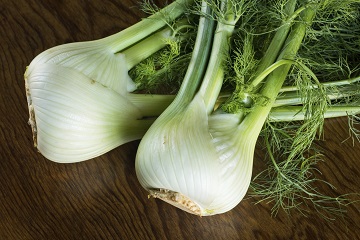 Whenever I walk the shoreline by the Port of Redwood City and the Marine Science Institute, I find myself fascinated by the tall stalks of wild fennel that line the edge of the slough. I pinch a few of the seeds between my thumb and forefinger to release the oil and inhale its sweet licorice fragrance. To me, its distinctive scent is redolent of sweet Italian sausage simmered for hours in sauce, and Galliano aperitifs on a warm summer evening.

It’s not surprising that wild fennel would grow so easily here in our own mild climate: fennel originated in the Mediterranean and was well-known to the Chinese, Indians, Egyptians, Greeks and Romans. Even in antiquity, fennel was revered both for cooking and for its purported healing properties.

These days, fennel is probably best known as an important ingredient in southern Italian cooking, though it’s used in other cuisines as well. If you haven’t tried it, now is the perfect opportunity: it’s coming into season (while it’s readily available year-round, the peak season runs from now through early spring), and we have plenty of it in the store.

What to look for

Look for a bulb that’s light green or whitish in color and foliage that’s a vibrant green. The surface should be smooth and may be slightly shiny, with no spots, splits, or bruising. You may detect a distinct note of licorice when you smell it.
How to keep it, ways to use it

Your fennel will keep in the fridge for a few days, but be aware that as it ages, it starts to lose flavor – so it’s best to use it soon after you buy it. When you cook it the flavor becomes milder and a little sweeter.

Here are a few ideas for ways to prepare and enjoy it.

It’s very refreshing sliced thin in a salad, such as with radish, avocado, and Cara Cara or Satsuma orange slices.

Chop the fronds and use them the way you would use dill or parsley.  Add to your marinara in the last few minutes so you don’t lose the delicate flavor.

It’s a good ingredient to smooth out your morning green drink: try it with cucumber, kale, lemon, and – to sweeten it a bit – your choice of fruit (apple or kiwi work well). Just quarter the bulb and pop it into the juicer.

One website we found suggests tossing fennel onto the hot coals of your grill for extra flavor in your chicken, meat, or fish.