In the Kitchen with Sigona’s Featuring: Celery 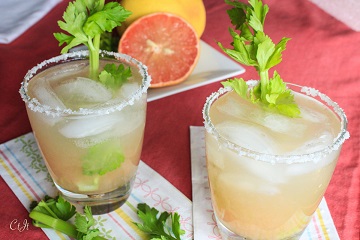 Directions: Thinly slice one stalk of celery into half moons, setting the remaining two stalks aside (preferably the two with more attractive tops), to be used as garnish).

Meanwhile, wet the rim of two short cocktail glasses, Old Fashioned work well, by either dipping them in the grapefruit juice or rubbing the edge with a segment of grapefruit. Sprinkle some kosher salt on a plate then evenly dip the rim in the salt to coat.

This side would be the perfect complement to Buffalo-seasoned chicken; it’d be a sort of classy version of hot wings, accompanied by blue cheese and celery, from the local pub. Adapted from Fine Cooking. Serves 4 to 6. 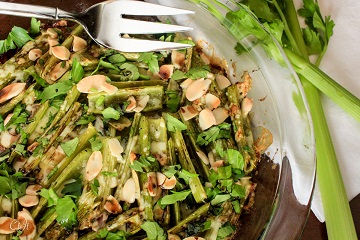 *If you’d like to more or less spice to the dish, adjust the ratio of butter and oil as desired.

Directions: Preheat oven to 450°F, ensuring a rack is in the center.

In a large bowl, combine melted butter, oil, honey, salt and pepper. Add the celery and toss to coat. Transfer to an 11-inch quiche dish or a 9×13-inch baking dish, spreading the celery out in an even layer. Roast until crisp-tender and starting to brown in spots, 25 to 30 minutes.

Meanwhile, roughly chop about 2 to 3 tablespoons of the celery leaves. Set aside.

Remove from the oven, sprinkle evenly with the cheese and almonds. Return to the oven to roast until the cheese melts and the almonds are lightly toasted, about 10 minutes.

Sprinkle the dish with the chopped celery leaves and drizzle with balsamic. Serve warm.

This protein-packed salad is crisp, light and refreshing, yet it packs some heat as a result of the Baklouti Green Chili Oil. It’s a nice side for a spicy meal, such as pork carnitas. Inspired by Sunset. Serves about 6. 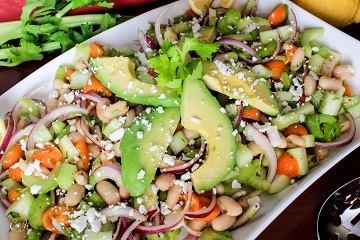 *To take some of the heat out of an off-season red onion, place the sliced onion in a bowl of ice water and allow to soak for about 10 minutes. Drain and pat dry before adding to the salad.

**The Baklouti Green Chili Oil packs a punch, so if it’s too spicy, use 1 tablespoon regular Sigona’s Extra Virgin Olive and 1 tablespoon of the Baklouti (or any other ratio that will please your palate).

Directions: In a medium bowl, mix together the beans, cucumber, celery, about 3 tablespoons chopped celery leaves, red onion and tomatoes. Add the salt, pepper, oil and juice of half the lemon; stir gently until combined, taking care not to break up the beans.

Transfer the salad to a serving dish. Top with slices of the avocado, squeeze on the juice from the remaining half of the lemon and sprinkle on the cheese, if using. Serve.