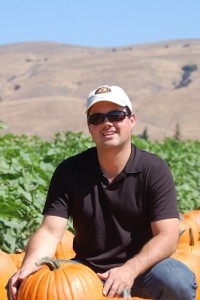 Fall is my favorite time of year, especially living in the Bay Area where fall is fantastic.

I love looking at all of the decorated houses in the neighborhood. A lot of my neighbors do a great job on their houses. I like the large orange pumpkins as most of us do, but I really love the more unusual pumpkins and squashes this time of year.

At Sigona’s, we carry a medley of different shapes, colors and sizes, from the decorative Speckled Swan gourd to the quintessential baking variety, the Sugar Pie pumpkin.

Here’s some tips on how to select a pumpkin:

Following are a few of the varieties you’ll find in our store this time of year. You can also click here for some recipes featuring pumpkins.

The giant Prizewinner is named as such because of its colossal size. This orange pumpkin has a glossy sheen and a true Jack O’Lantern pumpkin shape. They’re great for carving and eating.

The Sugar Pie (a.k.a. the Mystic) is the classic pumpkin pie pumpkin. It has a rich pumpkin flavor and one pumpkin is usually the perfect size for a single pie.

Most stores won’t carry a Howden because it is too big, but we’ve got ‘em! This large variety is the original Jack O’Lantern pumpkin, as it has a large stem and thicker walls that hold up well if carved. Its solid flesh makes it a good pie pumpkin, too. Howden Pumpkins were developed in the early 1970s by John Howden in Sheffield, Massachusetts.

The Ironman, formerly known as the Oz pumpkin, is a small-sized (about 6” in diameter) round pumpkin with a smooth surface, which makes them nice for painting.

The Cinderella pumpkin is a squatty pumpkin that’s called Cinderella because it looks like the pumpkin that became Cinderella’s coach when the Fairy Godmother waved her wand. It’s edible, but not usually eaten.

The Jarradale’s washed out blue-green color makes for a ghostly looking addition to your fall decorations. The deep orange flesh is soft with a sweet aroma and a pleasant flavor. This is an heirloom variety that originated in its namesake: Jarradale New Zealand.

The One Too Many (a.k.a. the Bloodshot Eyeball) is an orange and cream striped pumpkin that comes in many different shapes in sizes: some are oblong, some are round. This variety also makes tasty pies.

Speckled Swan Gourds: If you take a step back from the Speckled Swan gourd, you’ll see why swan is part of its name. The long neck (or stem) of the gourd grows up from the base and curves downward, resembling a swans head. This gourd is a dark green speckled with cream-colored spots.

Our mini pumpkins are just too cute to look at, don’t you think? They’re good for decorating as is and are also fun to paint around Halloween.

Decorative Gourds are usually miniature versions of edible sized pumpkins and squash. They’re bumpy and covered with warts, but they are very popular decorative pieces.

We also have small Jack O ‘Lanterns.  They’re perfect round shape and orange color makes them good carvers for children.

At first look, the Turban squash might seem best for fall decorating, with its bumpy skin, bulbous crown-like top and festive orange, white and green coloring. Although it’s sure to add the perfect touch to a Halloween tablescape, it’s also delicious to eat.

The Butternut squash has a tan, hard skin and an orange melt-in-your-mouth creamy flesh with a rich squash flavor. This squash is good steamed, baked, simmered or cubed and added to pasta dishes, risottos, mashed and served like mashed potatoes or pureed into soups. Roasted Butternut squash tastes like a less sweet version of candied sweet potatoes and is excellent with pork and turkey. Did you know the original Butternut was introduced in 1944?

Green Danish (also known as Acorn): This recognizable squash has dark green skin with deep grooves, called furrows, and a sweet flavor. Its skin is tough and thick, so take care when preparing by gently rocking the knife or squash while cutting. Cut off the top stem and bottom first. The orange-fleshed Green Danish is lovely when stuffed and baked with either savory or sweet ingredients. The term Acorn is an older name for this variety.

Spaghetti: The Spaghetti squash is classified as a winter squash, but it much different than other squash in the category. It’s named the Spaghetti squash because, when cooked, its flesh naturally separates into long Spaghetti-like strands…and yes, it serves as a good substitute for wheat- or grain-based pastas.

Sweet Dumpling: “Cute!” is usually what we hear as customers pass by the display of green and white striped Sweet Dumpling squash. They’re almost too cute and petite to eat, but don’t pass them up…they’re perfect for stuffing or roosting and make adorable personal-sized portions. This variety has a starchy texture and a mild flavor, so load them up with seasonings and other ingredients like sausage.

Banana: No, it doesn’t taste like a banana. This is a large, orange-colored squash with a mild flavor. We often have this one in our store pre-cut and seeded.

Delicata Squash: This is one of the more decorative squashes we’ll feature now, with its yellow and green stripes with deep orange-brown speckling. It has a thinner skin than many other winter squash and doesn’t store very well. It has a creamy textured, pale yellow flesh and a mild flavor that some say is similar to the flavor of corn or sweet potatoes. The flavor is richest when baked.